I arrived in Zurich around 1pm, courtesy of free return travel from anywhere in Switzerland, which was included in the marathon entry fee.  (Nice touch. 🙂  Pity my birthday wasn’t 4 days earlier otherwise I’d have had free entry too!)  Although I’d been to Zurich briefly before, just passing through, the first thing that struck me was how big the station was – with at least 36 platforms, spread over 3 different levels.  Goodness knows where all those trains must be going to and from, but then the city does lie in the middle of Western Europe.  The second thing was the number of people, all going about their Saturday shopping – and there are lots of shops in Zurich.

I was very impressed with the tram system, which was easy to understand, with route numbers colour coded, and the trams seeemed very frequent.  One of these took me to the Saalsporthalle to register.  No queues, meant that I was in and out in a jiffy and that gave me most the afternoon to wander back via the marathon starting area and along the lake. 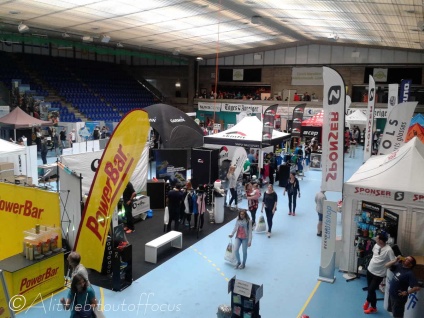 As you can see, the weather was glorious and 20 degree C (70 F) plus temperatures did not bode well for the following day…  (I’ve never been able to run in the heat).

By now, the route had done a 10k circuit of the city (in the shade) and it was now heading south, along the lakeside, (in the blazing sunshine) to the 25k turning point.

I’ll spare you the details but, for one reason or another, I’d started in a coral in front of the 3h 45m pacers, so I was expecting them to come past me at any time.  And sure enough they did, with their hoard of followers just before a feeding station, which caused a great amount of chaos.  By this time, around 16k, I’d noted that the number of people passing me was increasing.  To begin with this didn’t worry me, as there was also a “Team run” relay race going on in parallel, but as the trend continued, it became a bit of a concern.  I noted that I went through half way (21.1k) in around 1h 53m, so I was still on schedule, but by now my pace had really slowed – to around 6m per km (which wasn’t in the script).

Reaching the 25k marker became a goal in itself and when the 4h pacers went by me at around 26k, the wheels really came off…  My strategy turned to one of survival, with each km marker post or feed station, becoming a goal in itself.   I must have stopped and walked (other than at the feed stations) about 4 times on the way back, purely to re-coup and re-gather my senses.  I had no injuries as such – ok, my hip wasn’t perfect, but I just couldn’t get my legs going…  Seemingly endless bottles of water were either drunk or thrown over me, but there was just no way to cool down.

Eventually the city centre came back into sight and I knew that there was only about 6k to go.  The tall buildings provided some welcome shade and I finished quite well – running the last 3k without stopping at all.  My motivation was to make sure it wasn’t my worst ever marathon (at 4h 23m) and at least I achieved that aim, finishing in 4h 11m 30s (officially).  For some reason, my watch said 4h 13m, but I’ll take the official time. 🙂

Before the race, I’d been in touch with a blogging buddy, Mrs Twinkle who, like me, lives in Switzerland, though in the northern part, near Zurich.  As a fellow runner, who’d run the race a few years ago, she said she’d come along and support.  So I have to thank her not only for taking my picture, but also for making and giving me the fantastic sign (see below).  We met up for a drink afterwards, to swap life and blogging stories! 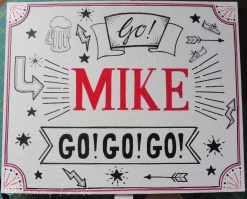 As a final postscript to my “Tales of the Scales”:  My weight did go up slightly last week to 73.6kg, but this morning it was down to 72.3kg, which is a loss of 5.4 kg from where I was several weeks ago.  So my ‘diet’ is now officially over 🙂 and it’s time to celebrate. 🍺🍺🍺