There is one key feature concerning mountain huts in the Alps, very early starts are the norm.  This is largely to make the best of the conditions, e.g. so that any ice bridges stay exactly that and don’t give way as you cross.  It’s especially true also when you plan to climb a 4,274m (or 14,022ft) peak called the Finsteraarhorn.   Des had opted out, so it was just Hannah, Aiden and I who were up at 4am to have breakfast before setting off.

Head torches on, the first rocky section was simple enough, but we soon found that we were the first group to attempt this peak since the rain/snow of Day 2.  This made going a lot slower, as poor Hannah (our guide) was having to break trail.  Every step was into a foot of snow, my feet were only a little larger and Aiden I guess had the best of it as he brought up the rear.

About half way up we spotted another group behind, taking advantage of our tracks and they soon overtook us.  We then benefited from their footprints.  The weather was relatively clear, but as we approached the shoulder, called the Hugisattel, we could see that the peak was covered in mist or cloud.  The wind had also picked up and spindrift (very small particles of ice) was battering us from the side, making life quite unpleasant.  Perhaps not surprisingly, Aiden decided he’d had enough, though Hannah convinced him to give the ridge a go.  We were already at 4,087m (13,409ft) after all, so we ‘only’ had about 200m (650ft) of height gain to go.

After rounding a large rock and climbing along the inside of a rocky ridge for no more than 50 metres/yards, Aiden reiterated that he didn’t want to continue.  My view was that I had no great desire to slog my way up a ridge in those conditions, if I was not going to get the benefit of the views from the top, so we all turned around and retraced our steps back to the Hut.

In a way it was disappointing, but my personal goal, at the beginning of the week, had been to climb higher than 4,000m and I had achieved done that and at least seen the views from there!

You may also wonder why there are so few images below – especially when there was so much magnificent scenery around.  It is true that I never used to take as many photos as I do now, but the main reason is that, when you are roped up, you don’t stop very often.  Also, quite a lot of concentration needs to go into watching the rope (for a novice like me anyway).  The rope between you and the person in front needs to be just right; not too slack (in case someone disappears down a crevasse and yanks you forward, off balance, so that you cannot arrest their fall) and not too tight, (so that you are hindering their progress).  By the end of the week, I likened it to fishing, where you are watching the line, just in case something happens.  As a result the camera tends to stay in its case until a pause is called by the leader. 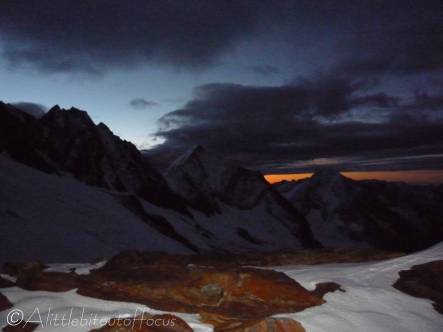 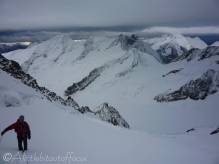 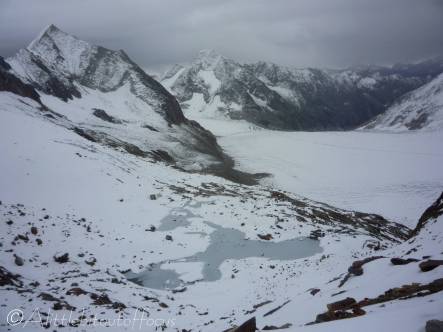 If this whets your appetite for more, then take a look at this video courtesy of Richard Pattison.  You will see what I missed and get a sense of the strength of the wind at the top.