I’ve not mentioned mountain huts very much during my posts, but I think it’s fair to say that they vary quite a bit – at least in the facilities that they provide.  You can almost guarantee that they are built in some superb places.

The Konkordia hut is at the basic end of the spectrum, with no running water to speak of.  There is a small tap which emits a few drops of water to clean your teeth and that’s it.  I’ll not describe the toilet facilities as it might put you off your breakfast, lunch or dinner, maybe all three!  However, it is positioned with a magnificent view over what can best be described as the confluence of 4 glaciers – the Grosser Aletschfirn, the Jungfraufirn, the Ewigschneefald and the Grüneggfirn.   These all join to flow down the valley as the Gross Aletsch glacier.  (See pic 1, though I will be posting more pics of this view as we returned to the Konkordia at the end of Day 4).

Our day would take us up the Grüneggfirn to the Grünhornlücke.  There we turned right and shortened the ropes to climb, alpine style (i.e. all together) up to the top of the Wyssnollen.  After a brief stop for lunch, we descended towards the Fiesch glacier.  Though Des, who was on the rope behind me, descended a little more than he expected.  Each of us had stepped over a crack, but he somehow missed it and fell into a crevasse.  Fortunately I was keeping an eye on him and grabbed and held the rope as his body disappeared.  His head was just about visible, but he was stuck and couldn’t get out.  While I held him fast, Hannah, our guide, unclipped herself, walked back up to where he was and hauled him out.

After roping back up, we then continued to cross the Fiesch glacier and ascend the short distance up to the Finsteraarhorn hut at the other side.  If you look closely at picture 12, you may be able to make out our path across the glacier.  The mountain hut is also visible if you are able to zoom in on pictures 7 & 9.  Remember, again, all of these pictures are taken in August. 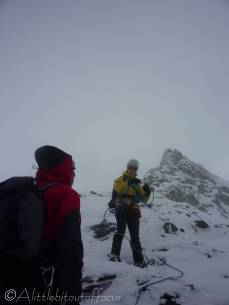 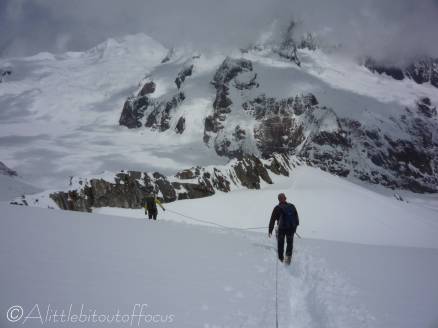 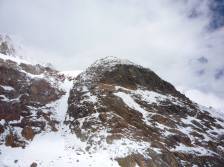