In case you missed Snowman update I – please catch up here.

I should have mentioned that my brother and his 2 sons had dubbed the snowman “MJ”, due to the way he was leaning like Michael Jackson in Smooth Criminal.  (If you don’t know what I mean, you can watch it here).  But now I think we need to refer to him as Elton because, if he could talk, he’d be saying, or even singing, “I’m still standing“.

Yesterday morning he’d leaned over so far backwards his head way was a mere 8 to 10 inches off the snow behind and by late afternoon that had reduced to a mere 4 to 5 inches.  However a severe crack had opened up at the base, so I didn’t think he’d last the night… 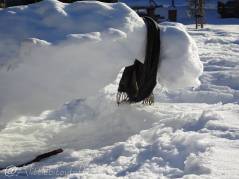 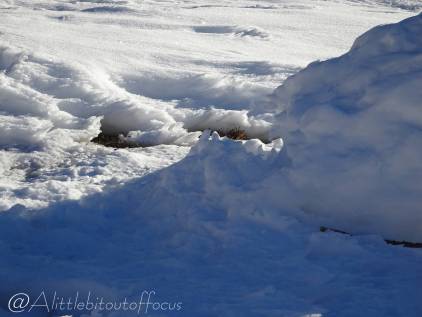 Just in case you think he’s propped up in any way by a broom or something on the far side, here’s a picture taken from the front:

But it seems Elton is a fighter and this morning he was still there, with his head just resting gently on the snow… 😊  Surely the laws of physics will take over soon? 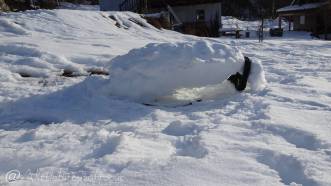